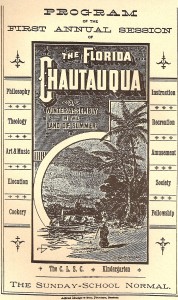 The Florida Chautauqua
A History of Revival
By:  Catherine Campbell

As America’s Bicentennial drew near, the community of DeFuniak Springs planned a celebration of its own which would prove to mark the rebirth of The Florida Chautauqua.  Plans began in 1975 in connection with the renovation of the Chautauqua Auditorium, built in 1909 as a major focal point of the original Florida Chautauqua, and known at that time as the Hall of Brotherhood.  With the end of the “Winter Assembly in the Land of Summer” in the 1920’s, the building had closed its doors to the types of activities that had marked The Florida Chautauqua.  A two-week Chautauqua-like session in 1932 was sponsored by the local Woman’s Club but, although the event had been considered a success, it was too cost-prohibitive in those Depression years to continue.

The City of DeFuniak Springs eventually acquired all the property owned by The Florida Chautauqua, including the Hall of Brotherhood.  It is interesting to note that although there was no longer a Chautauqua Assembly, over the years the building welcomed generations of people in the spirit of Chautauqua for events reminiscent of the Chautauqua era.  According to Chautauqua historian Anna Reardon, DeFuniak Springs and the auditorium were hosts to large annual music festivals with high school bands and singing groups from as far east as Live Oak and went to Pensacola.  The Florida State Opera Company presented several performances here as well.  Political rallies, church conferences, and school events also took place in the building over the years.  During the Depression- also according to Ms. Reardon’s history- the WPA sponsored a sewing center which furnished training and employment for local women, was well as other projects such as homemaking, woodworking, and art.  And for a number of years, meeting rooms on the second floor were used for gatherings of local civic groups.

Then for many years the building stood idle because of its deteriorated condition.  Over those years, a number of individuals and groups showed interest in the restoration of this priceless landmark and in using it again for the betterment and enjoyment of the community.  In the early 1970’s, even a group of Walton High School students held fundraising events in an effort to accomplish such a restoration.  Finally, in 1974, with financing from city, county, state, and federal sources, a renovation project began, only to be undone in 1975 by a hurricane which damaged the rear of the building so severely that it was eventually removed.  Happily, the remaining portions of the Chautauqua Building have since been restored and continue to serve as a focal point of the community, sponsoring many activities in keeping with the spirit of Chautauqua.

The hurricane and the resulting halt to the renovation, however, did not dampen the spirits of the Bicentennial Committee, which was compromised of individuals from throughout the community.  In July of 1976, a celebration took place in the Lakeyard complete with art exhibits, booths featuring historical displays, colonial costumes, old fashioned crafts and concessions, a colorful afternoon parade, live stage entertainment by area talent, political and religious messages, and a fireworks display.

This successful celebration was the spark of that would fuel the rebirth of The Florida Chautauqua, today on the brink of continuing into the 21st Century.  In 1977, the citizens of Walton County expressed a desire to preserve this great heritage and to revive The Florida Chautauqua by way of an annual festival.  And thus, The Chautauqua Festival, Inc. came into being, originally as an arm of the Walton County Chamber of Commerce, then becoming an independent arm of the Chamber with its own funding and responsibility.  Today it is an entirely separate entity relying primarily on city, county, and state funding and contributions from individuals and businesses within the community and its environs.

This local re-emergence has continued to grow each year, and The Florida Chautauqua has become synonymous with cultural offerings in Walton County.  Today it is known throughout Florida and nationally as an innovative organization which has brought the children and adults of Walton County quality educational and cultural programs, blending culture and tradition in a revival of the spirit that once made this region of Florida a pinnacle of culture.  A brief look at its twenty-five plus year history will reveal the dedication, creativity, and hard work of hundreds of volunteers (currently there is no paid support staff) throughout Walton County and the financial generosity of many individuals, businesses, and governmental grant organizations.

For several years after its rebirth, Chautauqua focused on recreation and fun- with trail rides, fun runs, sports tournaments, and a beauty pageant with scholarships for winners, all centered around Chautauqua Festival Day.  However, the organization eventually determined that its focus was too fragmented, with a lack of sufficient emphasis on culture, history, and education in keeping with the spirit of the original Florida Chautauqua Assembly.  A transformation took place as the years passed and Chautauqua became the wide-reaching entity it is today.

The original Chautauqua Assembly continues to serve as a baseline for all programs of The Florida Chautauqua, Inc.  Emphasis continues to be cultural education and the performing arts because that is where the organization’s roots lie, and because that is where one of its greatest needs continues to exist.  There are a number of areas within Walton County which are geographically isolated and economically disadvantaged, and the offerings of The Florida Chautauqua, Inc. have significantly impacted the cultural opportunities of many of the area’s residents who might otherwise never have had any exposure to the arts or access to training and participation in them.  The supporters of The Florida Chautauqua, Inc. count this both as one of its primary reasons for being and as one of its greatest successes.

With one foot firmly planted in its 19th century roots and a quarter century-length stride of growth, decline and rebirth, The Florida Chautauqua, Inc. now prepares to step into yet a third century of educational and cultural enhancement for the citizens of Walton County- still “building the future and restoring the past.”